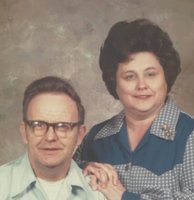 Brewer & Orono – Shirley C. Crosby, 90, wife of the late Willard E. Crosby, died June 9, 2020 in Orono. She was born Jan. 5, 1930 in Old Town, the daughter of Edward J. and Myrtle E. (Stillings) Russell. Shirley married Willard in 1947 and they were married for 67 years until his passing in 2013. She worked for New Franklin Laundry for many years but most importantly, she was a devoted homemaker and mother. Shirley was a wonderful cook, knitted and crocheted and enjoyed playing bingo. Surviving are five children, Willard E. Crosby II and his wife, Loretta, Beverly A. Sawyer and her husband, Leland, Michael W. Crosby and his wife, Carolyn, Steve A. Crosby and his wife, Kelly, Robert W. Crosby. She will missed by many grandchildren and great grandchildren; a brother and sister, George Gonyer and Jerry White both of Brewer. She was predeceased by her parents, her husband in 2013, an infant son in 1948 and by two other sons, Scott A. Crosby in 1973, Ronald M. Crosby in 2006 and by a brother, Edward Russell, Jr. A private burial for Willard and Shirley will take place at Blackman Cemetery, Eddington. For those who wish, memorial contributions may be made to the Alzheimers Association, Maine Chapter, 383 US Route One #2C, Scarborough, ME 04074 or at alz.org. Arrangements trusted to Kiley & Foley Funeral Service, 69 State St., Brewer. Messages and memories may be shared with her family at kileyandfoley.com.