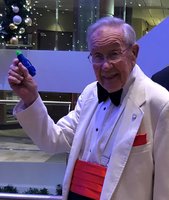 Dedham – Edwin L. Roberts, Jr., 89, husband of the late Elizabeth Affie (Walsh) Roberts, died unexpectedly July 11, 2020 in Dedham as the result of an automobile accident. He was born March 18, 1931 in Bangor, the son of Edwin L. Roberts, Sr. and Mae M. (Robertson) Roberts. Ed was a US Air Force veteran of the Korean War. He worked for B & A Railroad for 43 years, a job he truly loved. He resided in Derby for 57 years and was a founding member of the Milo Jaycees. He gave much time and effort to the community through the Jaycees. Most notably the building and hosting of track and field facilities and events. He was a member of the Rising Virtue Lodge #10, AF & AM and the Anah Temple Shrine Clown Unit in Bangor. He and Elizabeth were former members of the First Congregational Church in Brewer. In his retirement years, Ed drove vehicles for Quirk Auto and enjoyed painting and spending time at his home on Phillips Lake with all of his family. Ed also loved traveling throughout the world and affectionately became known as “007”. Most of all, he loved his family and was a devoted husband, father, and grandfather. Being a great-grandfather brought him the utmost joy. Surviving are his six children, Edwin L. Roberts, III and his wife, Luci of Mechanic Falls, Sharrlyn and her husband, Gerald Parsons of Carmel, Jeffrey S. Roberts, Sr. and his wife, Kelli of Petersburg, VA, David A. Roberts of Dedham and Stephen P. Roberts, Sr. and his wife, Jeanette of Hermon; grandchildren, Jannifer L. McNaughton, Jaime Elizabeth Tibbetts, Jeremy P. Forrest, Jeffrey Roberts Jr, Jared Edwin Forrest, Peter M. Parsons, Stephen P. Roberts Jr, Miranda R. Roberts, James L. Forrest, Grayson A. Roberts, Jodi Martin, Tonya Adams and Bobbi-Jo Nugent; great-grandchildren, Brian G. Forrest, Jeffrey S. Roberts III, Hazel Elizabeth McNaughton, Olivia Belle Tibbetts, Parker J. McNaughton, Wyatt G. Tibbetts, Corrine Affie Tibbetts, Kaydin L. Roberts and Laken K. S. McNaughton. He was predeceased by his wife in 2009, by his daughter, Janice Forrest in 2018 and by his sister, BettyLou McHale in 2014. He will be missed by his three pups that he loved so much, “his kids” Franz, Bruno and Velvet. Private graveside services with military honors will at Pine Trail Cemetery, Pine Trail, Dedham.