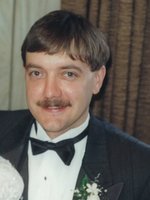 Brewer – Scott C. Byorak, 56, died unexpectedly July 13, 2020 at his home in Brewer. He was born March 31. 1964 in Bangor, the son of Daniel L. and Joyce M. (Leighton) Byorak. Scott was a 1982 graduate of Bangor High School and attended the Univ. of Maine. He worked for the Bangor Daily News as a foreman in the distribution department for 33 years. He enjoyed watching his son’s baseball and hockey games and was a New England sports fan of the Celtics, Bruins and Red Sox as well as a Washington Redskins fan. Scott also loved music, a passion he shared with his son. Scott was predeceased by his father, Daniel. Scott is survived by his wife, Cassandra (Bruns) Byorak; his son, Benjamin Byorak; his mother, Joyce Byorak all of Brewer; aunts, uncles, nieces and nephews. He will be remembered by the Hewes Family who are close family friends. Services will be held privately. For those who wish, memorial contributions may be made to Brewer Youth Hockey at brewerhockey.org or via email at fundraising@brewerhockey.org.