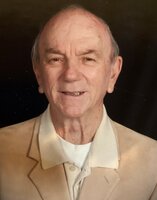 Ken Greve, 85, died unexpectedly on October 4, 2021. He was born in Brooklyn, NY, the son of John Roza and Edith Bachlund Greve and grew up in Malverne, NY.

Immediately after high school graduation, Ken joined the Marines, where he spent his next four years working on helicopters and anything that moved on wheels. After leaving the service, he started his own trucking company. When he met and married Joan, the love of his life, he left his business and worked for Pinter Brothers Trucking so he could be a husband and a father to Joan’s two daughters, and his own son Ken. After a year of marriage, Linda Sue was born and made a family of six.

After working for Pinter Brothers, Ken moved on to drive for Keebler and then Red Star Trucking. Ken had a wonderful bond with best buddies, Dom and Bob. They would spend Sunday’s poolside in Wading River eating pastries and solving the problems of the world. Ken loved history and would read anything pertaining to WWII. Ken also loved cars and trucks, and would collect and display model cars in his home.

After retirement Ken and Joan moved to Lake Ariel, PA, to build their dream house in the woods, and then moved to Ocala Florida, to get away from the snow. Ken and Joan’s final move was to Bangor, ME to be closer to family.

So long dad. Keep on truckin’….

Ken will be laid to rest next to his beloved wife Joan at 1 PM, Friday, November 12, 2021, at Calverton National Cemetery, Wading River, New York.  Messages and memories may be shared with the family at kileyandfoley.com.