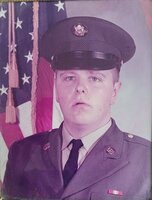 At five years old, Joe's family moved to Eagle Lake.  Joe always talked about the wonderful time he spent with his grandfather as a child.  Joe joined the Army in November 1972 and was on active duty until November 1974.  He then joined the Army National Guard in Brewer and later Bangor, where he retired in 2014 as Sergeant E5.  Joe was employed at Eastern Fine Paper from 1977-2003.  Joe then worked as a dump truck driver until October 2011.

Joe was an avid hunter and fisherman, and spent many hours with his Uncle Norman and cousin Jim.

A gathering will be held 1-3 PM, Saturday, June 18, 2022, at son Joey's home in Corinna.  Please reach out to Elaine if you plan on attending Joe's gathering.

Arrangements by Kiley & Foley Funeral Service, Bangor and Brewer.  Messages and memories may be shared with the family at kileyandfoley.com