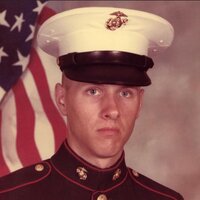 Andrew “Andy” Adams was a man of many names including Marine, Devil Dog, B.I.L., Funny Man, Bad Andy, Dad, and his most favorite Grampy. He was born and raised in Bath, Maine and was a proud graduate of Morse High School class of 1980. Upon graduation he joined the United States Marine Corps. He served honorably for 12 years before separating to raise his two daughters. He worked in facilities maintenance for many years for Sears, the Maine Veterans Home, and for Husson University. He was also a motorcycle enthusiast and was actively involved in Ryan’s Ride.

Surviving in addition to his mother, Alice M. Adams of Dresden are two daughters, Ariana McIntyre and her husband, Darren of Carmel and Amanda Adams-Jewett and her husband, Nicholas of Ellsworth; four grandchildren, Cameron Adams, Grace McIntyre, Teagan McIntyre and Kennedy Jewett; Jessica Sands of Levant who was thought of and considered to be his daughter; a sister, Synthia St. Laurent and her husband Andre of Hartland and one brother, Allen Adams and his wife, Terri of Bucksport; nieces and nephews.

Family and friends may visit 4 to 7  PM Wednesday, July 6, 2022 at Kiley & Foley Funeral Service, 299 Union St., Bangor. A private burial and committal with military honors will be held at Maine Veterans Memorial Cemetery, Augusta. For those who wish, memorial contributions may be made to charity a veterans charity of choice. Messages and memories may be shared with his family on the tribute wall of kileyandfoley.com.