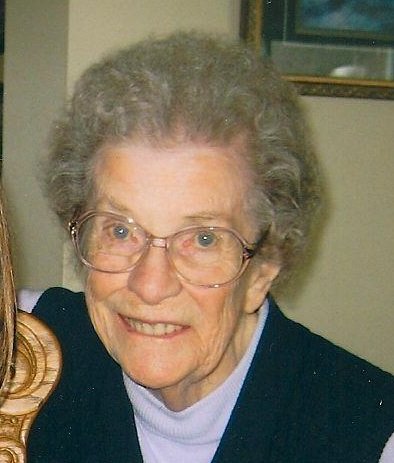 Obituary of Elizabeth A. Bowden

Orrington - Elizabeth “Betty” Kane Bowden, born March 9, 1919 in Mahanoy City, PA, passed away at a Bangor hospital on February 5, 2019. Betty was the daughter of James and Minnie Dreisbach Kane. She graduated from St. Canicus High School in 1936 and went on to graduate from McCann’s School of Business in 1937. Initially she worked two local jobs, for the American Red Cross and for a local lawyer. When WW II broke out, she moved to Washington DC and worked with the JAG office of the Department of the Navy. It was during this time that she met her future husband, Wallace Bowden, of Orrington, Maine, who was stationed at nearby Fort Meade, where they were married on June 23, 1945. At the end of his military service, they settled on King's Mountain in Orrington and raised their family.  Betty was a stay at home mom until her youngest began school, apart from doing ballot clerk for local elections, then rejoined the workforce, working at Eastern Paper Mill, the former Dow Air Force Base, Armed Forces Examining and Entrance Station and lastly, the Social Security Office, where she worked until her retirement in 1984. At all stages of her life she was active and involved in organizations having to do with her children, such as Girl Scouts, PTA, and the now defunct Enterprise Grange. She was also involved in the VFW Auxiliary, and after her retirement she volunteered for EMMC from 1987 until 2008  Betty was an avid reader and enjoyed word games and crossword puzzles. She also bowled well into her 90’s and lived independently until she was 99. While bowling she attended many national bowling tournaments all over the country. Teammates were always amazed that wherever they bowled she always had friends or acquaintances in the area. She was also a big fan of the U of M women’s basketball games and on her birthday in 2018, at 99 years old, was in the audience supporting their win at a championship game, along with a live interview by ABC local news. She was in her glory!

To send flowers to the family or plant a tree in memory of Elizabeth Bowden, please visit Tribute Store
Monday
11
February