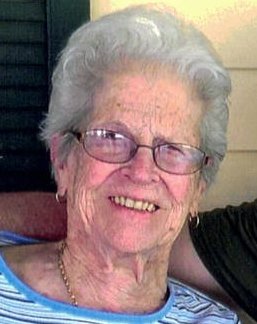 Madelene G. Bartol, wife of the late John (Jake) G. Bartol, died peacefully the morning of July 16, 2019 at The Woodlands in Brewer.  Maddie was born Nov 19, 1921 in Unity, Maine, daughter of Frank and Iva (Burpee) Gerrish.  She attended schools in Unity and Monmouth, and then graduated from Oakfield Community High School. She worked at Houlton Air Force Base, Ft Totten, NY and Dow Air Force Base in Bangor in accounting and finance for many years.  She enjoyed the beach, bridge, canasta, and gardening.

Maddie is survived by daughter Barbara Bartol of Arizona, sons Curtis and wife Anne of Glenville, NY, John Jr. and wife Lynda of Zephyrhills, FL, and James and wife Marcia of Holden; ten grandchildren:  Kristin Markworth, John Schultz, Gina Cook, Ian Bartol, Clarence Michael Emmons, Jessica Bartol, John Bartol III, James Bartol, Jr. and Joseph Bartol; and six great-grandchildren: Madeleine and Shannon Cook, Kai and Darya Bartol, Ben and Elise Markworth. She is also survived by her sister Jacqueline Gerrish, sister-in-law Diana Gerrish, and beloved nieces and nephews.  In addition to her parents and husband of 68 years, Maddie was predeceased by her sister Francina Haskell, brothers Frank Jr. (Bud), Ralph and Timothy Gerrish and grandson Danny Brown. The family wishes to extend a sincere thank you to the staff at Woodlands Memory Care and the nurses and volunteers from Beacon Hospice who lovingly cared for Maddie and kept her comfortable in her final days.

Family and friends may visit 5 – 7 PM Monday, July 29, 2019 at Kiley & Foley Funeral Service, 69 State St, Brewer. A Mass of Christian Burial will be celebrated 11:00 AM Tuesday, July 30, 2019 at St. Paul the Apostle Parish, St. Teresa’s Catholic Church, 425 South Main St, Brewer. A time of friendship and refreshments will be immediately afterward and interment will be at a later date in Oakfield. For those who wish, contributions in her memory may be made to Beacon Hopsice, 289 State St., Bangor, ME  04401. Messages and memories may be shared with her family at kileyandfoley.com or sent to 35 Skyline Drive, Holden, Maine 04429.

To send flowers to the family or plant a tree in memory of Madelene Bartol, please visit Tribute Store
Monday
29
July

Will be at a later date in Oakfield

A time of friendship and refreshments will be immediately afterward in the church parish center
Share Your Memory of
Madelene
Upload Your Memory View All Memories
Be the first to upload a memory!
Share A Memory
Send Flowers