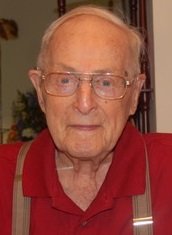 He graduated from Brooks High School, attended Farmington State Normal School and transferred to  University of Maine, Orono where he received his B.S. and M.S. degrees.  His career had variety.  After spending 14 years in Education during which he was a teaching High School principal   in the towns of Monroe and Winterport, Maine, he then became Superintendent of Schools for the School Union comprising towns of Winterport, Frankfort, Prospect, Stockton Springs and Searsport for 7 years.

He then made a career change and spent 10 years managing Clements Chicks in Winterport followed by several years as Asst. Manager at Union Mutual Insurance Co. in Bangor before he returned to his teaching career at Bucksport High School where he taught math and science to seniors for 14 years until he retired.  Those years were the most rewarding of his teaching career and he always enjoyed hearing from and following careers of his former students, especially Dewey Martin of Hampden, who was his accountant and gave so much of his time to help in many ways during this past year. Arthur and Euleta met at Farmington where they were both violinists and both went on to play for many years with the Colby College Community Symphony, more than 23 years with the Habenicht Chamber Music Society of Bangor and Bangor Symphony. After retirement they moved to Eastport where he pursued his interest in photography, especially in the area of black and white with its challenges in development and printing.  He became interested in woodworking and restoring their old ship captain’s home while spending part of winters in Florida.  After Euleta’s death, Arthur returned to Bangor full time.

Arthur is survived by  loving  partner of recent years, Lorraine Flood, nieces Barbara Johnson of Bermuda and Vermont, Dorothy Closs of S.C. and Diane Dennis of N.Y. (children of his deceased sister, Evelyn Benson) , special cousins Susan and Ralph Grimmer of California, and special friends Rosa and Frank Sutton of Robbinston, ME. Many thanks go to the staff at Phillips -Strickland House and caregivers from Visiting Angels  for their kindness during his recent decline.

A private burial will be held at a later date in Farmington. For those who wish to honor his memory, donations may be made to the Arthur A. Webb and Euleta Rand Webb ’35 Scholarship Fund at the University of Maine, Farmington, 242 Main St., Farmington, ME 04938. Arrangements trust to Kiley & Foley Funeral Service, 299 Union St., Bangor. Condolence messages and memories may be shared at kileyandfoley.com.

To send flowers to the family or plant a tree in memory of Arthur Webb, please visit Tribute Store
Services for Arthur Webb
There are no events scheduled. You can still show your support by sending flowers directly to the family, or planting a memorial tree in memory of Arthur Webb.
Visit the Tribute Store
Share Your Memory of
Arthur
Upload Your Memory View All Memories
Be the first to upload a memory!
Share A Memory
Send Flowers