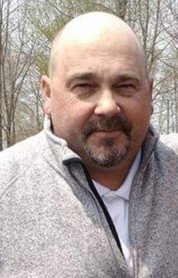 Richard A. Libby Jr., passed away peacefully surrounded by his family, on July 17, 2021.

Rich was born on October 28, 1964, and raised in Brewer, Maine by his parents Richard and Donna Libby. He graduated from Brewer High School in 1984, where he discovered his love for sports--his favorites being baseball and football. Shortly after, he met the love of his life, Michelle Butterfield and they married in 1988. In July of 1993, they had their first child, Tyler Libby. Three years later in 1996, they had their daughter, Megan Libby.  Rich started a sheet metal business with his father in 1995, which he operated until he and Michelle moved to Mount Desert Island in 2015. On the island, Rich and Michelle formed close relationships in the community and started a successful cleaning and caretaking business, “Rags to Riches”.

Rich was a man of few words, but if you mentioned one of his favorite topics, he would light up like a Christmas tree. One of his passions was coaching. He coached an array of sports teams for over 30 years including but not limited to: Brewer Youth Football, Brewer PAL Basketball, Holbrook Middle School Girls and Boys Basketball, Holden Little League Baseball, Brewer Community School Baseball, Brewer Middle School Football, and most recently Brewer High School JV and Varsity Football. To Rich, coaching was more than just wins and losses, it was about teaching young athletes about life on and off the field. He also had the opportunity to coach his children, to whom he passed on his love for sports.

Despite his tough-guy exterior, Rich was a kid at heart. This was apparent when talking about his love for all things Disney. Rich and Michelle were always planning their next trip to Disney World. His most recent obsession was camping. Rich and Michelle spent the last couple of summers camping at the Bar Harbor Campground where they made many new friends. Rich expressed his love language through food--he was famous for making a meal that was triple the amount needed and then sending the leftovers home with his friends and family. His favorite time of year (after football season of course) was Christmas; when he would bake cookies with his wife and decorate his house to rival Clark Griswold’s.

Above all was his love for his family and pup, Ramsey. His wife and children were the light of his life. Those who were loved by Rich knew that if they needed anything, he would be there.

A celebration of life will be held at a later date.  Messages and memories may be shared with the family at kileyandfoley.com

To send flowers to the family or plant a tree in memory of Richard Libby, please visit Tribute Store

A Memorial Tree was planted for Richard
We are deeply sorry for your loss ~ the staff at Kiley & Foley Funeral Service - Brewer
Join in honoring their life - plant a memorial tree
Services for Richard Libby
There are no events scheduled. You can still show your support by sending flowers directly to the family, or planting a memorial tree in memory of Richard Libby.
Visit the Tribute Store
Share Your Memory of
Richard
Upload Your Memory View All Memories
Be the first to upload a memory!
Share A Memory
Send Flowers
Plant a Tree