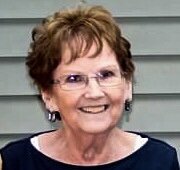 Please share a memory of Mary to include in a keepsake book for family and friends.
View Tribute Book

She went to school in Carmel and graduated from Carmel High School, Class of 1951. She married her husband, Everett in 1954. They made their home in Carmel and were married for 65 years, until Everett passed last year. Mary took time off to raise her family and then went to work as an operator for New England Telephone, and later AT&T, until her retirement in 1987. She was a member of the Telephone Pioneers. She enjoyed dancing, playing cards, and gardening. Mary’s favorite times were spent with her family and playing with her grandchildren.

If Mary was known for one thing, it was that she had the gift of gab. She could carry on conversations about anything: the weather, politics, how much traffic was going by the house or what might be going on down there on Route 2. If you needed an hour or two to pass, she was your woman. She could make the time go by in an instant with her stories. This trait also made her really good at crossword puzzles and giving her grandchildren a more flowery vocabulary. But if she was known for two things, the other would be her cooking. Our family favorites were her zucchini bread and relish, molasses cookies and her baked beans. We enjoyed her peanut blossoms just the day before she passed. Even her young great-grandchildren knew how good she was, saying, “Nana can’t walk good, but she’s good in the kitchen.” Mary was hip right to the bitter end: drinking sangria, getting her first smart phone, playing Wordle and looking 10-15 years younger than she actually was. She will be greatly missed.

A private graveside service will be held in the spring. Messages and memories may be shared with the family at kileyandfoley.com

Share Your Memory of
Mary
Upload Your Memory View All Memories
Be the first to upload a memory!
Share A Memory