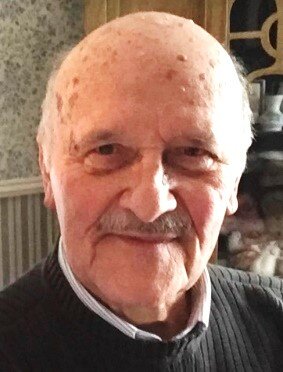 Brewer – Richard H. Fernald, Sr., 92, husband of the late Denise L. (Deveau) Fernald, died April 8, 2022 in Bangor after a brief illness. He was born April 6, 1930 in Winterport, the son of Fredrick and Anna (Downes) Fernald. Richard was a longtime resident of Brewer and worked for many years for A & P Supermarkets and later was self-employed as a paint and wall-papering contractor. Richard and Denise were communicants of St. Paul the Apostle Parish, St. Joseph Catholic Church, Brewer and were active in the church serving as Eucharistic ministers and singing in the church choir.

Richard also sang with the Mainely Music Chorus. He was an avid outdoorsman, enjoying hiking, hunting, and fishing, especially fishing for lake trout and salmon at Moosehead Lake. He was also a dedicated fan of the Boston Red Sox and Boston Celtics. Richard enjoyed time spent with his family, particularly time with his grandchildren and great-grandchildren.

A Mass of Christian Burial will be celebrated 11 AM Thursday, April 21, 2022 at St. Paul the Apostle Parish, St. Joseph Catholic Church, No. Main St., Brewer. Burial will be at Oak Hill Cemetery, Winterport. For those who wish, memorial contributions may be made to the ASPCA or the National Audubon Society. Arrangements trusted to Kiley & Foley Funeral Service, 69 State St., Brewer. Messages and memories may be shared with his family on the tribute wall of kileyandfoley.com.

To send flowers to the family or plant a tree in memory of Richard Fernald, please visit Tribute Store
Thursday
21
April

Look inside to read what others have shared
Family and friends are coming together online to create a special keepsake. Every memory left on the online obituary will be automatically included in this book.
View Tribute Book
Share Your Memory of
Richard
Upload Your Memory View All Memories
Be the first to upload a memory!
Share A Memory
Send Flowers
Plant a Tree