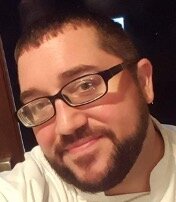 Please share a memory of Zachary to include in a keepsake book for family and friends.
View Tribute Book

Columbus, GA and Brewer, ME—Zachary Bernard Jamieson, 45, passed away unexpectedly from natural causes at his home in Georgia on November 17, 2022.

Zachary attended Husson University and Columbus State University with a focus on public relations and communications.  For most of his life, he worked as a bartender/server in different locations.  He enjoyed cooking and creating new dishes and had hoped to open his own establishment someday.  Zachary loved music and played the bass guitar on his own and in several bands.  He also loved to write stories as much as he enjoyed telling them.  He always had a tale to tell!  Above all, his favorite pastime was spending time with his daughter Madison, who he affectionately called “Mooskie”.

A celebration of life will be held at a later date.  Arrangements by Kiley & Foley Funeral Service, Bangor and Brewer, Maine.  Messages and memories may be shared with the family at kileyandfoley.com

To send flowers to the family or plant a tree in memory of Zachary Jamieson, please visit Tribute Store

Look inside to read what others have shared
Family and friends are coming together online to create a special keepsake. Every memory left on the online obituary will be automatically included in this book.
View Tribute Book
Services for Zachary Jamieson
There are no events scheduled. You can still show your support by sending flowers directly to the family, or planting a memorial tree in memory of Zachary Jamieson.
Visit the Tribute Store
Share Your Memory of
Zachary
Upload Your Memory View All Memories
Be the first to upload a memory!
Share A Memory
Send Flowers
Plant a Tree