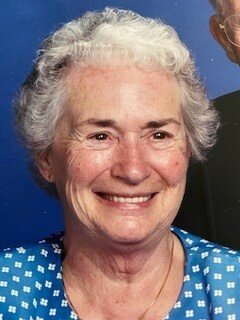 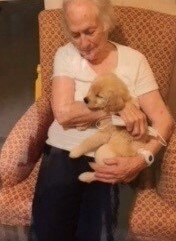 Please share a memory of Mary to include in a keepsake book for family and friends.
View Tribute Book

Mary Theresa “Terry” Daigle, 89, beloved wife of the late Franklin A. Daigle passed away peacefully January 14, 2023, in Bangor surrounded by her loving family. She was born May 21, 1933, in North Troy, Vermont, the daughter of Maitland G. and Aimee R. (Grenier) Mason. Terry was employed as a secretary for St. Joseph Hospital and the University of Maine of Augusta in Bangor for many years when she wasn’t at home raising her children.

Terry grew up in northern Vermont and after high school graduation, she moved to Nashua, NH for employment. Terry was introduced to Frank on a blind date set up through a mutual friend and in less than 6 months they were married on July 11, 1953. While the courtship was short, their love was forever. After moving to several homes throughout New England, Frank and Terry spent most of their lives raising their four children in Brewer. For the past few years they lived at Dirigo Pines Retirement Community in Orono and recently Terry had moved to the Maine Veterans Home. She was a longtime communicant of St. Paul the Apostle Parish, St. Teresa’s Catholic Church in Brewer. Terry was a loving wife and mother, devote Catholic and fastidious housekeeper. She enjoyed helping at church with the Ladies of St. Anne Sodality, playing cards with her friends and spending time with her family. Terry relished the company of her many pets, both cats and dogs and never hesitated to stop to pat any dog that she encountered.

A Mass of Christian Burial will be celebrated Monday, June 5, 2023 at St. Paul the Apostle Parish, St. Teresa’s Catholic Church, 425 S. Main Street, Brewer. Interment will be Tuesday, June 6, 2023 at Notre Dame Catholic Cemetery in North Troy, VT. In lieu of flowers, gifts may be made in Terry’s memory to St. Joseph Hospital Chapel, c/o St. Joseph Healthcare Foundation, PO Box 1638, Bangor, ME 04402 or at stjosephbangor.org. Arrangements by Kiley & Foley Funeral Service, 69 State Street, Brewer. Messages and memories may be shared with her family on the tribute wall of kileyandfoley.com.

To send flowers to the family or plant a tree in memory of Mary Daigle, please visit Tribute Store
Monday
5
June

Look inside to read what others have shared
Family and friends are coming together online to create a special keepsake. Every memory left on the online obituary will be automatically included in this book.
View Tribute Book
Share Your Memory of
Mary
Upload Your Memory View All Memories
Be the first to upload a memory!
Share A Memory
Send Flowers
Plant a Tree