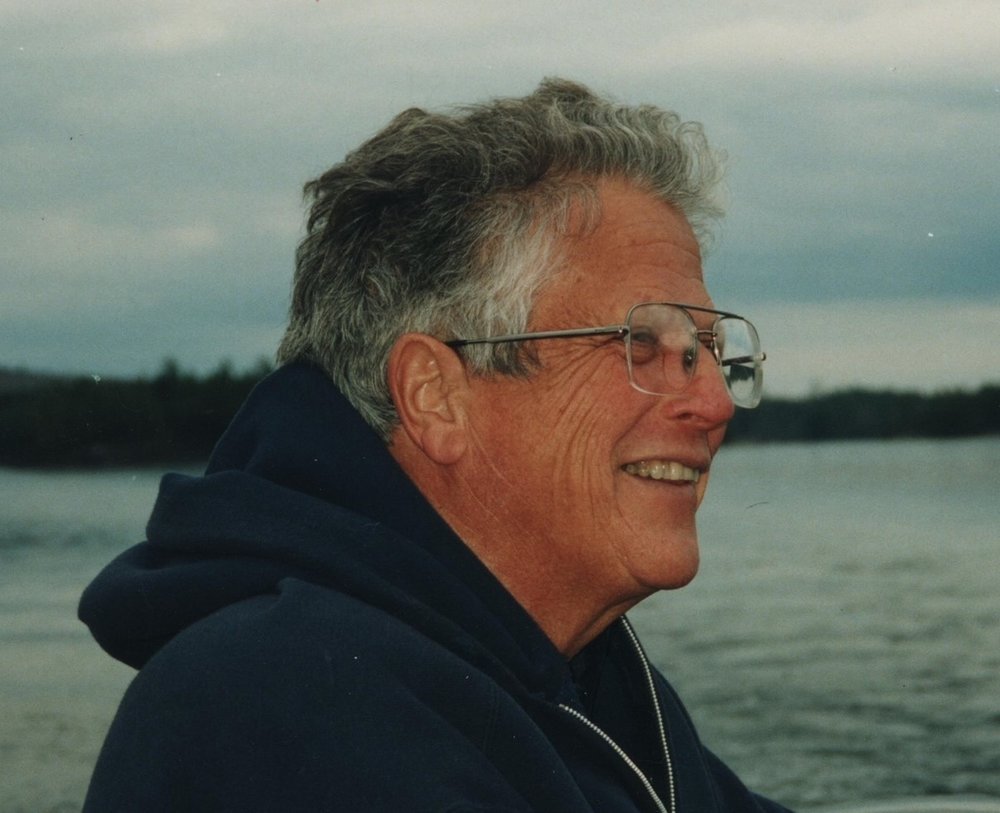 Please share a memory of Ronald to include in a keepsake book for family and friends.
View Tribute Book

Ronald “Rock” Pooler passed away peacefully from natural causes on May 7, 2021 surrounded by his family, at the age of 93, in his home on Lucerne Lake.  Rock was born in South Brewer , ME on December 6, 1927, the son of Victor and Mary Pooler.

Rock graduated from John Bapst High School and attended the University of Maine, where he received his BA, MEd and CAS degrees.   He excelled in sports and played baseball and football in high school and college.  His love of sports continued throughout his life as a coach and referee at several churches and schools.  He ran the Catholic Youth Organization for 14 years.  Rock ran “Rocky Landing Boys Camp” on Chemo Pond  for 14 summers. Rock was a biology teacher, first at Searsport High School, then Bangor High School, John Bapst High School and finally at Brewer High School, where he spent 22 years as a teacher and then Vice Principal.

Rock married the love of his life, Joan O’Brien Pooler on October 25, 1952  after she paid $5.00 for the marriage license.  They were married for  68 years.  In addition to Joan, he is survived by his four daughters:  Joan and husband John Rivard of Dunedin, FL, Ronnie and husband Ollie Ilich of Tarpon Springs, FL, Ann and partner Margaret Mudge of Madison, WI, and Pati of Dedham, ME.   Rock is also survived by his dear friends, John and Deborah Darling. “Pa” Pooler is also survived by his beloved “Unholy Seven” grandchildren:  Jessica and husband Brett Foster of Odessa, FL, Joshua Rivard of Clearwater, FL, Adam and wife Jasmine Pooler of Narareth, PA, Jacob Pooler of Boring, OR, Patrick and wife Fay Pooler of Sandy, OR, Danielle Friedman of Berlin, NJ and Nicholas Ilich of No. Chelmsford, MA. “Pa” is also survived by his “8 Greats”:  Kaleb, Annie and Abbie Pooler, Charlotte Rivard, Rylan and Ronan Foster, and Ben and Sam Friedman.

Rock was pre-deceased by his son, Ronald “Rick” Pooler, Jr. in 1980 and by his brothers Victor, Walter and Robert and sister, Marilyn.

Rock enjoyed fishing, boating, playing poker and especially raking.  He was a lifelong Red Sox and Patriots fan. Rock was a gentle, kind man who mentored many youth throughout his career.  He will be dearly missed.

In lieu of flowers, donations may be made to St. Joseph’s Home Care & Hospice, 279 Center Street, Box 402, Bangor, ME 04401 or a charity of your choice. There will be a private memorial service for the family followed by a reception for the public 4:00-7:00 PM Tuesday, July 6, 2021 at the Lucerne Inn. Arrangements trusted to Kiley & Foley Funeral Service, Bangor and Brewer. Messages and memories may be shared with his family at kileyandfoley.com.

Look inside to read what others have shared
Family and friends are coming together online to create a special keepsake. Every memory left on the online obituary will be automatically included in this book.
View Tribute Book
Share Your Memory of
Ronald
Upload Your Memory View All Memories
Be the first to upload a memory!
Share A Memory
Plant a Tree